“Don’t forget Cassper took Milli and made Doc Shebeleza” – Says Ifani . SMH so this Cassper and iFani twitter thing is actually a real thing now. As many would remember this started off with iFani calling out Cassper Nyovest for his much talked about song ‘Tito Mboweni’ calling it trash.

Whilst Cassper Nyovest has not officially responded to iFani’s tweets, he opted to not comment directly by saying “I’m a musician, I make music. I’m not a tweleb. If I have something to say, it’ll be on my album. My album is coming out on the 7th of May.” 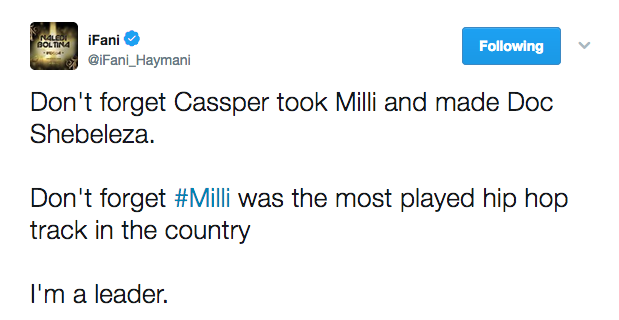 What are your thought on iFani’s sentiments? Do you think that Cassper took Mili and made Doc Shebeleza?