Check Out Stogie T’s Reaction To Sizwe Dhlomo’s Typo! Sizwe Dhlomo is a very well-known entertainer and social media personality. Sizwe found his voice on the twitter streets, gaining a well built reputation for himself as a content creator.

Sizwe recently posted a tweet with a typo and this left the people on twitter shook since it is highly unusual. “So guys, nothing against uNdosi at all but are we now forgetting why he was fired to being with? Or do we no longer care?,” tweeted Sizwe.

It did not take Stogie T long to notice the typo in Sizwe’s tweet and respond to it. “TYPO!!!!!! Damn waiting like 3 years for this,” tweeted Stogie T. Da L.E.S picked up Stogies reaction and reacted tweeting “Stogie 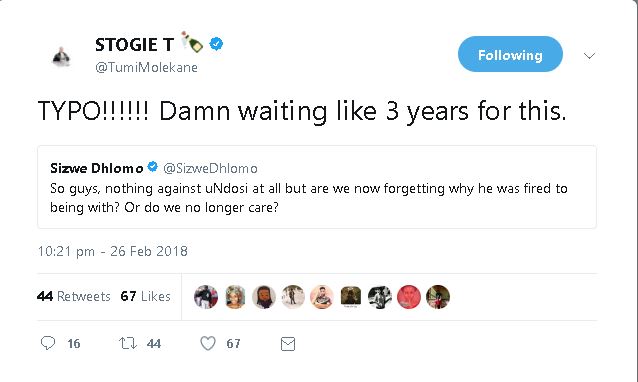