Burna Boy Announces He Is Leaving Twitter After Backlash From Nigerians. Being a celebrity requires for one to have a thick skin considering the views people may have of you.

Social media to be precise has made it impossible for other artists to have a peace of mind. But usually the backlash that causes depression starts with the way artists act, could be what they say or do.

When the masses are upset they threaten to cancel a celebrity, Burna Boy may have touched nerves with his sentiments. He was criticized severely by fellow Nigerians to a point where he decided to quit Twitter.

The African Giant has landed on hot water a few times for his opinions online. The recent drama had to do with the Xenophobic attacks in South Africa and AKA. His tweets cited violence and hate which led to South Africans on social media ‘cancelling him’. His show in SA was also cancelled because people demanded an apology before he set foot in the country. He ended up not apologizing.

He seemingly displeased Nigerian twitter whe he said it wasn’t his job to help underprivileged people.

He are his replies to the backlash. 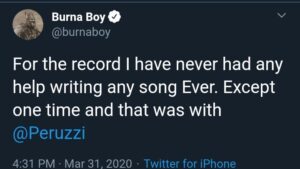 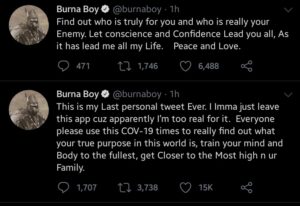