Here’s A List Of Top 15 Hip Hop Beats Gemini Major & Tweezy Put Against Each Other During The Battle. SA Hip hop is blessed enough to have producers who constantly play a major role in grooming  and illuminating the culture.

When we hear hits, we always too quick to give credit to an artist. As much as artists are too deserving of the appraisal, more credit is due by producers as well.

Since the country is in full lockdown musicians are pressured to get creative to not lose their fan base. Rappers are doing the most, Touchline and Stogie T have already given fans a few IG Live rap battles which included the likes of YoungstaCPT, Rouge and JayHood to say the least. But, it doesn’t end with rappers, producers also showcased their craft.

When Gemini Major announced the battle people didn’t know what to expect. When the battle began, they gave out the fire that only GOATS are capable of spewing. They both went back and forth playing out the music they have produced before.

When the name Gemini Major comes up you can be reminded of the singles such as Gets Getsa by Cassper, K.O Supa Dupa, Nasty C Juice Back, Riky Rick Sidl’ukotini. All that is to name a few of the gold and platinum selling songs.

The completion was a bit tight considering what Tweezy had delivered before : AKA Sim Dope, Areece Paradise, Rouge Mbongo Zaka, Emtee Corner Store and Kwesta’s Day Ones. This is just part of the list.

For now Gem clarified that they were only focusing on the beats, and that there will be next time. “This is the catalogue me and ⁦@TweezyZA⁩ dropped tonight..We’ll do it again soon ,this time just beats,” wrote the Right Now mastermind.

Check the full list of what they used to go against each other: 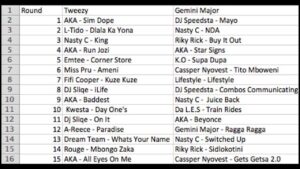