Inspite Of The Beef Cassper Answers If He Could Ever Collaborate In Music With AKA. The Cassper-AKA beef may be the biggest one to ever hit the industry, but people still often hope or rather wonder if the two could collaborate.

In the course of the uprising of SA Hip Hop we’ve seen rappers reach a point 20 years ago was unimagined for SA. The likes of Hip Hop Pantsula, Skwatta Kamp and ProKid paved the way with conscious rap.

K.O, Kwesta and Zakwe introduced a fusion of Kwaito and morden day hip hop.  In time AKA, Cassper and Nasty C came bombing up the scene with vibe, style and western swagg. These new age rappers made it so big that fans were now inspired to go for their dreams because flourishing seemed a possibility.

The way to the success that AKA and Cassper walked involved beef. At first it was believed that they were faking for ratings, then it got to a point where every one believed it was real. When Mega recently dragged Mufasa, insulting his parents even his d*ck size it was an indication of a lot of things.

Mega challenged Tsibip to a boxing match with a price of a Million and a winner to take dignity with. While most dubbed Cass a coward he agreed to the fight. Even so, some still wish for a harmonious reconciliation between the two.

A tweep recently stated how they would love a collaboration amongst the two rivals. The Good For That made it clear that it will never happen, not now, not ever. He emphasized that they will see each other on the ring. 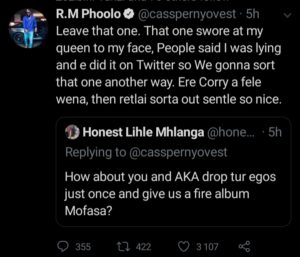