SA Musicians Comment On AKA’s Preview Of New Record. Supa Mega has dropped yet another snippet off from the album he promised to drop some time this year.

Most snippets have captured the interests of many fans but the recent one might be the best.

Released on Instagram the snippet didn’t only impress fans but fellow celebrities who praised how dope it was. The video sees the rapper spitting hooks while over the phone with DJ Tira. The song comprises of AmaPiano elements which had Scooped expressed great praise.

Here are reactions to the new record; 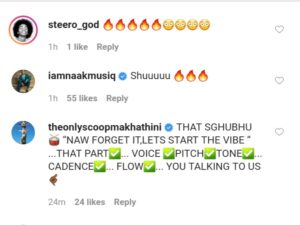 One more work the rapper has been working on is his concert Fees Must Fall Concert which didn’t become a success on set time. On a radio interview, he explained what caused the delay.

He said “One of the reasons we postponed the concert is, I realised that in order for somebody to give me millions and of rands, I have to have certain structures set up, so that money can’t just go to AKA productions…The money has to go to the foundation that we have to set up properly….for me to do this it’s a huge undertaking, I just ask for people to stay patient because it is a very important cause for us, for these students to be helped.”