Maggz has been scarce in the game and the twitter police are out on the search for the rappers whereabouts. Maggz made it on to the twitter trend list after an intense debate about the rapper was engaged by many who felt that he needs to make a comeback, because he might be just what the game is missing right now.

Maggz and Sean Pages have been rolling in the same circles since their Glitterati days with former group members L-Tido, and Morale and following a few solo projects, the ‘Big Time’ rapper took a step back from the world of hip hop and now the masses want him back ASAP.

Sean Pages joined in the conversation by praising the lyricist for his amazing writing ability, claiming that Maggz has a God given talent when it comes to putting ink on paper.

“Ey man, Maggz’s is always a special reminder that konje man got the breath of God in them. This man’s pen bro” he wrote.

Black twitter since came up with a number of suggestions to get Maggz’s attention on social media in hopes of getting an answer to their plea of blessing us with his talent like old times.

Maggz has yet to answer to this but we can only hope that the former Cashtime Life rapper hears the people and their urgent cries.

The man's pen is celestial 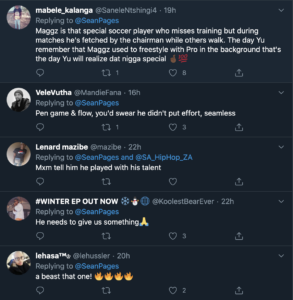 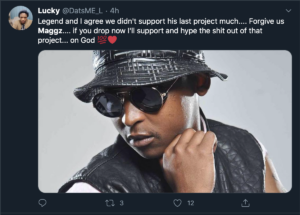 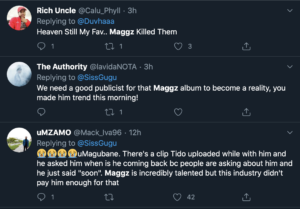 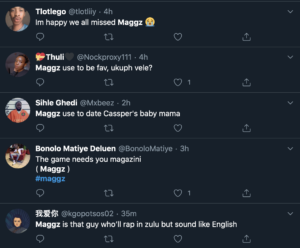