“Happy birthday my love,” Cassper Shares The Most Beautiful Image Of His Baby Momma. When Cassper announced he was expecting his son Khutsho he was compelled to reveal the baby momma even though he had always been adamant on keeping his love life private.

She goes by the name of Thobeka Majozi and is the woman that Cassper has been protecting from the public he considers vile. The rapper wished the new mother a happy birthday by posting an image of her holding her belly.

Cassper revealed once why she preferred to distance Thobeka and their relationship from social media.

“I’ve learnt that public relationships don’t work out. When you have an argument at home and go to an event later, you must pretend everything is okay,” he says.

Nyovest expressed how tired he is of people poking their noses in his love life. “People will say, ‘I don’t like this one, go back to Boity’,” he adds.

It seems having a baby turned things around for the rapper who now posted her woman with so much love and pride. 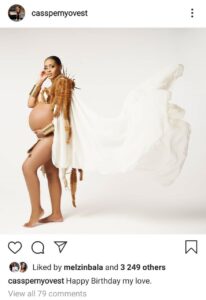