Here’s How Can Celebrate With Cassper On His 30th Birthday Party. If you a huge Cassper fan then you have been granted a chance to spend with him a day on his extravagant birthday bash. The Good For That rapper is turning 30 and wanted to go all the way out to celebrate himself.

Mufasa recently announced that he will be hosting a birthday party and expects fans and celebrity friends to join him. The best part is that there’s space for 200 fans who will be considered based on how quick they purchase the available tickets at R300. The party will take placs on the 16th of December. 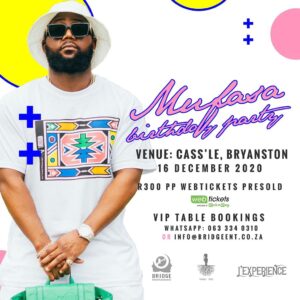