Everyone is now aware how twitter can make and kill your mood in instant; celebrities know that more than anyone else.

When you a public figure no matter what you say tweeps who are like wolves and you the red meaty steak will eat you up and drag you. Black Twitter has become a nightmare for others and for most a lesson.

Listed below are Hip Hop musicians who have fallen right into the mouths of the scavengers of twitter who were more than glad to roast and toss them.

During the hype behind Babes Wodumo’s abuse from Mampintsha, most people were on Babe’s side and emotions were all over the place with people catching feelings to every detail.

Kid X might have said the right thing at the wrong time because tweeps chewed him up for stating that Babes Wodumo need prayer just as much as Mampintsha does. Being a humbled guy that he is, he remained calm and clarified that he meant that as much Mpintsho was in the wrong he also needs healing from his inner demons, the clarification made no difference.

2.Ntukza for claiming that he doesn’t mind his white wife calling him a “Nigger”

While most blacks find offence in being called Niggers by whites former Teargas member begged to differ and justified why he doesn’t when his white wife calls him by the N word that most white people know better than to say it in public. Tweeps came at him with daggers and swords, expressing how he is “lost”.

3.Pitch Black Afro for bursting in laughter in a court case of the murder of his wife

Pitch Black Afro is currently facing murder allegations of his wife who was murdered by the 31st of December 2018 on a B&B. In one of his court cases he was pictured by one of the local publications laughing his teeth out, the behavior had most believe that he was mentally unstable, others created all these funny memes while some expressed rage at how killing a woman has become a joke in SA.

Mufasa just couldn’t express love and appreciation of his body without dragging a poor overweight man who was at the back from where he was standing on the pic he shared who was clearly minding his own business. Tweeps didn’t like that at all, they proved to him just how un-cool it was.

5. Scoop Makhathini for cussing out his now ex-girlfriend on twitter

Tweeps didn’t like Scoop’s reaction for being allegedly cheated on, he trended for a few hours with others consoling him and some just calling him out for being bitter. 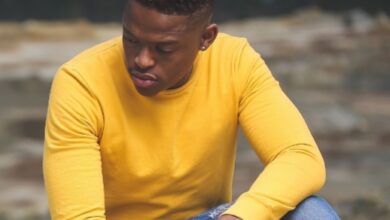