Burna Boy Becomes The First African Artist To Reach Over 200 Million Streams On Spotify. He may be referred to as over confident but Burna Boy proves how he is worthy to brag.

The international star has been dubbed the first and by far only African artist to to dominate Spotify.

Spotify is one of the most prominent music platform where artists submit their albums and singles for streaming. It has played part in grooming artists and exposing their music to even larger audiences.

Burna Boy has broken many records already both in Nigeria and worldwide. Earlier this year his single Own It went gold in the UK and another On The Low Gold in France. In addition to the success of his singles, his album African Giant earns him 200 Million Streams on Spotify. 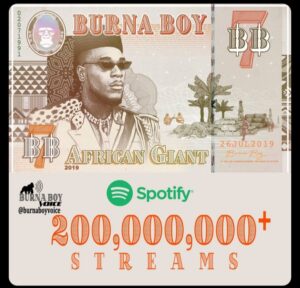