How SA Rappers Reacted To The Tweezy × Gemini Major Producer’s Battle. The way Gemini Major and Tweezy have shaken up the streets last night and today, they might have gained even more fans. The two producers went on a part 1 battle that grabbed the attention of all SA hip hop lovers.

The battle ended up involving a number of other rappers who commented and expressed what the battle meant for the culture.

Most times it feels like producers aren’t appreciated enough, Gem and Tweez rewrote the stereotype. They have both worked with all the biggest SA rappers, they never chose sides because the ethic for them is to deliver heat and forget the drama.

The battle was deemed fair and square as they both played their beats back to back. Cassper, Nasty, L’tido, Rouge and JR to say the least are amongst fans and artists who reacted to the battle.

Here are the reactions:

TWEEZY AND GEM DID SO MUCH FOR THE CULTURE. WOW THAT WAS INSPIRING 🙌🙌🙌🙌 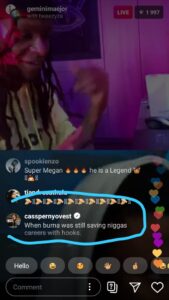 When Gem played Supa Dupa I’m certain all of us on that live stood up in our living rooms. Yoh 🔥