Nasty C Shares A List Of Big International Cities He Would Like To Do Shows At. After having the pleasure of doing shows in different parts of Africa including international countries such as Japan and American, Nasty C still has more cities on his to-do list.

The Bad Hair rapper took to Twitter to share countries such as Iraq, India and Toronto as the ones he can’t wait to do shows at. He wasn’t specific if he has shows lined up in those places but knowing his habit of getting and making the best out of his career, one can expect the positive.

The rapper now counts as an international artist being signed to Def Jam which means his market goes beyond just a few countries.

“We’ve been waiting for the West to bet on us and give us a chance. It felt like for the longest, either people would just look in and leave here with their own interpretation of what Africa is, or they would not even entertain it at all.

“It started with the streaming platforms letting us in; then you had magazines coming down. That was big to me when they started to dial in. Everyone’s fucking with us now,” he said about going international. 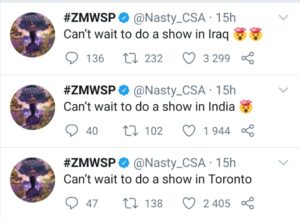