SA Rappers’ Reactions To Big Zulu Dominating SA Hip Hop In 2020. At the rate Big Zulu is going it can’t be denied that he has set the bar so high in SA Hip Hop.

The 34 year-old rapper’s hit record Imali Eningi escalated his musical prowess though he has been owning the game from years way back starting off as an actor.

At first there were assumptions that SA rappers weren’t showing much support to the Bergiville rapper – out of jealousy. Those assumptions were shut down in just a day when SA rappers expressed how proud they are of Big Zulu. From last week most artists have been taking on a challenge to his song made famous by Dududzane Zuma.

The Vuma Dlozi’s rapper domination include having four of his new songs be at the top 5 of the iTunes chart. In addition millions of views on Imali Eningi music video, and basically all the love he has been receiving from fans and prominent figures.

Big Zulu has managed to win using his home language and staying true to his style. This has inspired other rappers who have expressed their views of him. 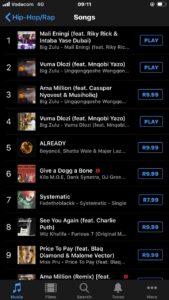 Below are SA Rappers’ Reactions To Big Zulu Dominating SA Hip Hop In 2020:

“Nothing more beautiful than seing Big Zulu Win. Humility. Hard work . And sticking to your objective. I applaud you Nkabi yam.”

“If #ImaliEningi was another artist’s song and not @BigZulu_ZN ‘s, they would have already cooked the numbers to 10 x Platinum.”