After a groundbreaking success of his single ‘Danca’, Nigerian rapper/singer AcebergTM – or Aceberg for short – will release his debut EP ‘Far From Home’ on April 16th. The EP, which contains six songs, will be released on the same day as the music video of the hit single ‘Danca’.

‘Danca’ is a perfect blend of Afropop mixed with Amapiano beats, and is the main single of the ‘Far From Home’ EP. As a kid growing up in a city populated with creatives, ‘Far From Home’ was inspired “by the thought of me trying to be abstract” AcebergTM said. Each of this travel represents a journey, untold stories and the passion to be extraordinary. The ‘Far From Home’ EP coming out on April 16th is the untold story of six songs. These six tracks represent a journey and a rare talent which covers four different genres, namely Afropop, Afrobeats, R&B, and Amapiano beats. “The reason behind my craft and this body of work is myself a rapper trying to show more versatility and to create and fit into my own niche in the music industry”.

Acebergtm (real name Ikechukwu Okoronkwo) was born in Lagos, Nigeria, where he grew up being the second child in a family of five children. AcebergTM and his siblings grew up listening to different music genres. Everyone had a different taste in music, so they’d listen to all kinds of songs, but his interests were mainly focused on hip-hop and rap genres with Wyclef Jean being his main artist to listen to.

He went from singing along to music he loved, to finding his own sound. At the age of 15, he started writing his own music as he loved poetry and writing and felt strongly about a career as a song writing. He also discovered quite early that he had a good voice and had a couple of friends in secondary school who he sang with for fun.

“Growing up as a kid, music turned out to be my only escape from peer pressure and other vices which kids my age were involved in such as smoking and street fighting; I got a strong sense of peace and satisfaction every time I heard my favorite songs growing up. My interest grew even more as I got older, I wanted to write, sing, rap, perform just like my favorite artists I saw on tv” – Acebergtm

As he grew older, he found his way in and out of studios, linking up with different producers and young artists, thereby honing his skills as a rapper and a singer. “Aceberg”, as he is popularly known, began his musical career in early 2013, starting off on a bright note. He has worked with several producers including Kel P, Phantom and Tempoe, WineXroll as well as JFred, Fredibeat, Oshobeats, Nakmademus, Mcomms, Graydon to mention but a few. The first song ever released online was titled ‘Letter to God’ under the name “Ace Berg”. He lists artists such as J. Cole, Drake, Burna Boy as his musical influences, inspired by their sound, their lyrics, and lifestyle.

Aceberg describes his time in college as tough; he had to balance his studies whilst trying to chase a music career. He studied Computer Science at the Federal Polytechnic Nekede, Owerri, Imo State, in the Eastern part of Nigeria and graduated in 2018.

In February 2020, he signed his first professional contract with music heavyweight ‘Sir Justine World Entertainment’. At the time of his joining the label, the label had other frontline acts such as Victor AD, and Peruzzi and he gained a lot as he worked with and watched these artists produce good music. Aceberg dropped his first professional project, ‘Heart Breaker’ under SJW Entertainment on the 31st of July 2020. The audio and music video have gained over five million streams across all platforms within just five months. 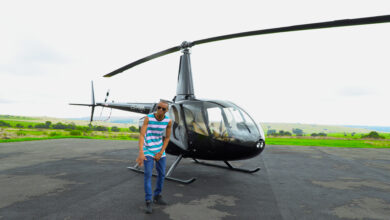