AKA Warns Nasty C To Not Make The Same Mistake He Did! A week ago Nasty C changed the game and made history when he announced his new deal with Def Jam Recordings accompanied with the lead single and visuals off of Zulu Man With Some Power.

Whilst the industry seemed supportive and proud, not everyone is feeling the single ‘There They Go’. One critic even took to twitter addressing the ZMWSP rapper on how his new sound is not a representation of South African Hip Hop but Atlanta Trap. Nasty C clapped back saying the reason why he’s a rapper is because of an Atlanta trap n*gga.

“Relax. The reason why I’ rapping is because of an Atlanta trap N*gga. If you don’t like it, skip it and zip it,” Nasty C tweeted.

In case you didn’t know, Nasty has mentioned a couple of times how American rapper, T.I is his idol and the reason why he raps. Nasty posted his response to the critic on Instagram sending a message to everyone else who might share the same view.

In reaction, AKA commented under the post giving Nasty C some advice on how to deal with such criticism. “Don’t make the same mistakes as me…do whatever the fuxk you want,” AKA commented adding, “take us to the top now junior…it’s all on you.”

AKA has mentioned in different interviews his belief that Nasty C is the SA rapper who will take SA Hip Hop to the top. It’s great to watch him be consistent in his support for Nasty. 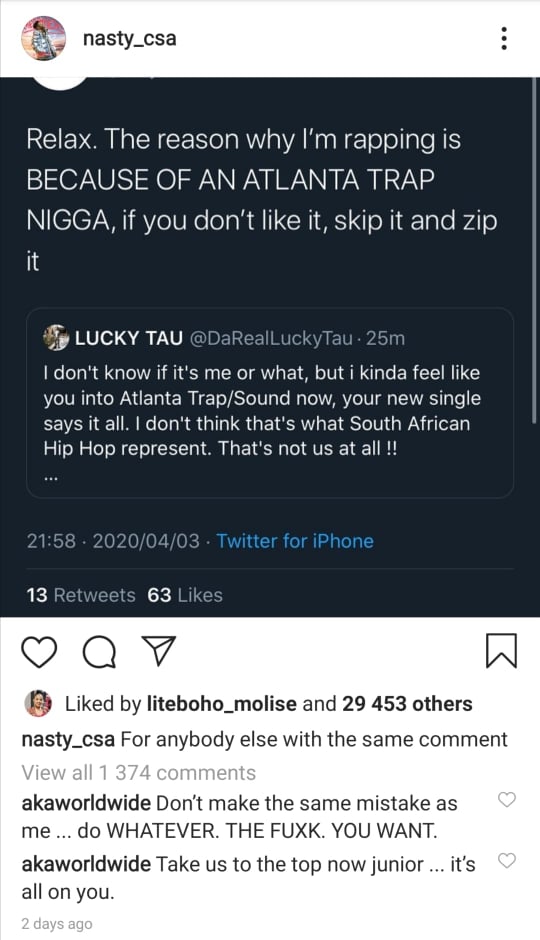