Sho Madjozi has secured a fan base with both adults and children, and the rapper has made sure to cater for both when it comes to her music and her style. Taking to social media Sho revealed her limited edition range of face masks for children between the ages of 5 and 10 years old, teens and adults.

Taking to twitter and Instagram, Sho debut her vibrant face masks that were launched online at 18:00PM yesterday and are limited to a certain number so unfortunately for fans its strictly first come first served. The rapper revealed that she partnered with painter and illustrator Olivie Keck to come up with two different looks and feels for each mask.

“The super cute artwork on my masks was made by @oliviekeck😍🥰 and I am obsessed! Have you gotten yours yet” she wrote.

The masks are valued at R150 each and the first one hundred customers will receive a free gift from the rapper, which is a Sho Madjozi bag. 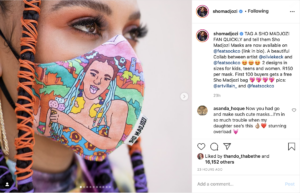 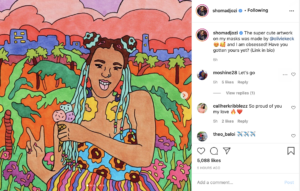 The John Cena hitmaker not only revealed her merchandise but she also announced her feature on Nigerian award winning Afro pop singer Davido’s up coming 17 tracked album “A Better Time”, that is set to be released this coming Friday. The song is called “I Got A Friend” and is also assisted by Naija artist Mayorkun among many other heavy weight features which include Nicki Minaj, Lil Baby, Tiwa Savage and more.