Fans Call Out Riky Rick For Polar Bear Picture! Riky Rick’s week seemed to be going well laying on a cushion of his clothing brands launch success. The rapper recently posted a picture of himself with a polar bear and this had his fans questioning the picture.

A lot of Riky Rick’s fans were very skeptic about the polar bear in Riky Rick’s picture. This is because the bear did not seem real to some, who called the picture photoshopped. “What do y’all think of my new pet? I need help naming her though,” tweeted Riky Rick with the picture of him and the polar bear.

I smell Photoshop,” tweeted one fan who questioned the legitimacy of Riky Rick’s “new pet”. The fact that it is a Polar Bear alone had some fans wondering how he got a creature from the arctic circles to Africa. Some fans believed that the bear is real, this is because Riky had previously posted a picture with a huge box indicating that it contained a live animal. 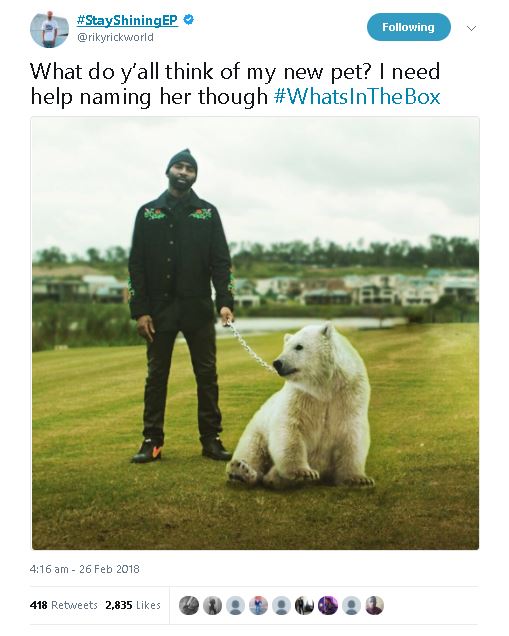 True…
Luk at the shadow of the Bear

Relax people….in S.A you need a licence to keep some animals classified as exotic as pets, a polar bear does not fall under this category…..hell I didn’t even know we had polar bears in captivity in S.A.

It’s not that deep.

Raise your hand if you think its Photoshop pic.twitter.com/G8njdkWb8G