Reason Comments On Emtee’s Decision To Remove His Benz Tattoos. Months after losing his two Mercedes Benz cars Emtee revealed his decision to eliminate the tattoos he got to honour his car collection.

To put Emtee in a position of positive mindset was fellow rapper Reason who reminded him that his tattoo can still mean something. The Roll Up star lost his cars after getting into different accidents with them. Damages to repairranged from R700 000 upwards which Ambitiouz Entertainment boss ordered him to pay.

After leaving AE the rapper went broke to a point where he couldn’t sustain a house he rented with his family in Midrand. At this point he is no possession of no car which is why he felt like removing the tattoos.

“How do I remove a tattoo? I wanna remove this Mercedes tat cos I thought I owned 2 Mercedes Benz kanti niks,” write the Hustla.

Reason told him that he didn’t have to remove the ink instead use them as motivation to get back his cars.

“Nah fam. Keep the tat. Just get the 2 Merc’s and keep it moving. We all now how it went down, so no pressure,” commented Reason.

Em even went as far as admitting that Flame his rival was right when he dissed him with his cars. 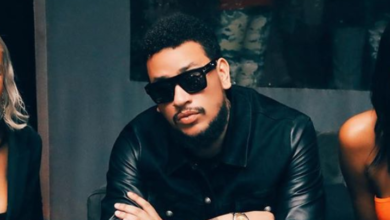